On Covenants and the RPCNA Today

I'd like to preface this article by saying that this is a work that represents my own opinion and is not a majority position in the RPCNA today. In fact it might even be a stretch to consider it a minority position as it may in fact be somewhat unique in its basis. It is not my intent to create any division or ill-will between myself and my brothers and sisters in the RP Church and beyond, so please read it with those things in mind.

I have been studying the history of the Covenants of the Reformations in Scotland and their treatment by Reformed Presbyterians through the history of the RPCNA in particular. In my attempt to better understand rightly what Covenant faithfulness looks like in a nation which lacks recognition of a godly basis of authority and without a nationally established Kirk (Church) connected to its citizens from birth, I have come to some preliminary conclusions that I considered worth sharing.

The current Constitution of the RPCNA (2013) includes the Covenant of 1871 which has the following language in it:

"We confess and bewail our forgetfulness of the obligations laid upon us by the Covenants of our fathers, in that we have often walked contrary thereunto, in not testifying fully and clearly in word and act for the claims of Jesus Christ, the Head of the Church, and the Prince of the kings of the earth. We have sinned, too, in that, while witnessing for social covenanting as an ordinance of God, binding under the dispensation of the Gospel, we have not as a Church in this country, by our own act, performed the duty.


We do resolve and engage before the Lord carefully to...in obedience to the command of God, comformably to the practice of the godly in former times and recognizing all that is moral in the Covenants of our worthy religious progenitors of the Second Reformation, do hereby give ourselves in covenant to God, to His Church, and to one another.


That after careful examination, having embraced the system of faith, order and worship revealed in the Holy Scriptures, and summarized, as to doctrine, in the Westminster Confession and Catechisms, and Reformed Presbyterian Testimony, and, as to order and worship, justly set forth in substance and outline in the Westminster Form of Church Government and Directory for Worship, we do publicly profess and own this as the true Christian faith and religion, and the system of order and worship appointed by Christ for His own house, and, by the grace of God, we will sincerely and constantly endeavor to understand it more fully, to hold and observe it in its integrity, and to transmit the knowledge of the same to posterity. We solemnly reject whatever is known by us to be contrary to the Word of God, our recognized and approved manuals of faith and order, and the great principles of the Protestant Reformation... We abjure and condemn Popery with...its corrupt and heretical teachings.


We reject all systems of false religion and will-worship...and pledge ourselves to pray and labor according to our power, that whatever is contrary to godliness may be removed, and the Church beautified with universal conformity to the law and will of her Divine Head and Lord.


Committing ourselves with all our interests to the keeping of Him in whom we have believed; in faithfulness to our own vows, and to the Covenants of our fathers...plainly and decidedly, oppose and discountenance all and every known error, immorality, neglect or perversion of divine institutions. Taking as our example...the great cloud of witnesses who have sealed with their blood the testimony which they held, we will strive to hold fast the profession of our faith without wavering."


So, we find in the Covenant of 1871, multiple references to the Covenants of the Scottish Reformation forefathers. They are "obligations laid upon us," which would seem to me to indicate that they are believed to be in some sense binding upon Reformed Presbyterians today.
The Covenant of Communicant Membership vow (page G-1 of the Constitution) states in section 4 that the member does, "promise to submit in the Lord to the teaching and government of this church as being based upon the Scriptures and described in substance in the Constitution of the Reformed Presbyterian Church of North America."
It would seem the sense in which the Covenant of 1871 binds us to the "Covenants of our fathers," especially the Solemn League and Covenant of 1643 (SL&C), and the Westminster Standards (listed in the Covenant of 1871 as specifically including the Westminster Confession and Catechisms, Westminster Form of Church Government and Directory for Worship along with the RPCNA Testimony) " is in their "General Equity" - language I've borrowed from WCF 19.4 in reference to the Mosaic law.
Even further to our duties to the SL&C, a small element of the RPCNA swore the SL&C at Octorara Pennsylvania in 1743. (And again renewed in Boston, with an acknowledgement of renovations, 1853.)
If this conclusion is correct, it would seem that we could be in need of review of the SL&C to determine our present obligations (in their general equity) and to revise the rest of the Constitution to bring it into conformity with the General Equity of the original Directories for Publick Worship and perhaps other documents produced by the covenanted reformation forefathers. One such example that comes to mind is the strict condemnation of observing "holy days" other than the Lord's Day as found in the Appendix to the Directory for Publick Worship and the First Book of Discipline of the General Assembly of the Kirk of Scotland (1560).

As part of my research, I carefully examined the text of the original SL&C to see if I could determine what would, in fact, be binding to us from it today. A pastor in the RPCNA responded to an inquiry of mine about the SL&C stating, "All churches descending from what is now the UK are under the Solemn League and Covenant in its ecclesiastic aspects, so far as the circumstances allow. The RPCNA, for example, adopted and swore the Covenant of 1871 that attempted to do just that. There is occasional discussion internally on whether or not it still applies. A minority...believe it still does."

In keeping with his emphasis on its "ecclesiastic aspects, so far as the circumstances allow," I produced this post, entitled, "A Thought Exercise: What Would the SL&C Bind Covenanter Descendants to in America Today?" In the interest of space, I'll outline the elements that are in that revised version of the SL&C which removes its references to Kingdoms and Kings and obligations to them in favor of what remains obligations to the Covenanted Church:

So, if that is indeed our responsibility as the Reformed Presbyterian Church, I can only ask: what reason could we possibly have for not courageously and joyfully submitting to the Covenants of our forerunners in the Reformation of Christ's Church? Which of those things do the Westminster Standards (in their original forms) not already bind us to?

It is my prayer that we all as individual believers and as a denomination would do some prayerful soul-searching so that we might have confident answers to these questions with the Glory of Christ as our metric for the soundness of our answers. 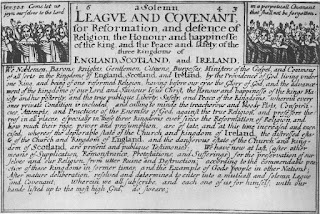